“a story of hurt, regret, missed opportunities and redemption.”

Julianne counts the days until she can pack her bags and leave her old-money, tradition-bound Southern town where appearance is everything and secrecy is a way of life. A piano virtuoso, she dreams of attending a prestigious music school in Boston. Failure is not an option, so she enlists the help of New England Conservatory graduate Isaac Laroche.

Julianne can’t understand why Isaac suddenly gave up Boston’s music scene to return to the South. He doesn’t know her life depends on escaping it before she inherits her mother’s madness. Isaac knows he must resist his attraction to a student ten years his junior, but loneliness and jealousy threaten his resolve.

Their indiscretion at a Mardi Gras ball—the pinnacle event for Mobile’s elite—forces their present wants and needs to collide with sins of the past. Will Julianne accept the help she’s offered and get everything she ever wanted, or will she self-destruct and take Isaac down with her?

“Powerfully uplifting, sexy, and gripping, I fell for a Southern guy named Isaac.” 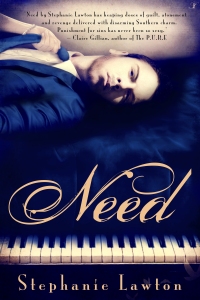 Isaac Laroche is cursed. All he wants to do is hide out and feel sorry for himself. Never mind that he got caught sleeping with his seventeen-year-old piano student, or that he abandoned her when the truth was exposed.

Isaac’s feisty high school sweetheart has different plans. Heather Swann has returned to their hometown of Mobile, Alabama, to regroup after breaking up with her troll of a fiancé. She’s restless and looking for a diversion, but she bites off more than she can chew when she sets her sights on rehabilitating Isaac with her unorthodox sexual, mental, and physical plans.

The two quickly reconnect, but their happiness is threatened by family secrets, old vendettas and the death of a beloved father-figure.

Can Heather handle Isaac’s baggage, or will her own come back to haunt them both?

Nothing in life is predictable. Are you prepared?

It’s impossible to focus on college biology when your family believes doomsday is imminent and the government is out to get you.

All Pete Wilson’s ever wanted is to become a veterinarian, but those dreams are going up in flames. Commuting to an urban college and helping his parents with their apocalyptic prepper crap is more than he can handle.

Worse, Pete’s asshole neighbor is stirring up trouble, his family’s stockpile has been destroyed and farm animals are turning up dead.

Lindsey Linger is the tomboy sister of his best friend. Now a sexy spitfire, she and Pete are liable to set the barn ablaze as their romance finally heats up. But she’s hiding a terrible secret, and rural life isn’t all bonfires and hayloft romps. That becomes clear one icy winter night when the survival of everyone Pete loves hangs in the balance.

Can Pete be the hero they need, or will this be the end of the world as he knows it?

an engaging gothic tale rich with atmosphere and history.”

It’s been six years since Dylanie and her family visited a Civil War site and the place came alive with cannon fire. Problem was, no one could hear it but her.

Now she’s sixteen, her dad’s moved out, her mom’s come out of the closet and Dylan’s got a spot on Paranormal Teen, a reality TV show filming at historic Oakleigh Mansion. She’ll spend a weekend with two other psychic teens—Jake and Ashley—learning how to control her abilities.

None of them realized how much their emotional baggage would put them at the mercy of Oakleigh’s resident spirits, or that they’d find themselves pawns in the 150-year-old battle for the South’s legendary Confederate gold. Each must conquer their personal ghosts to face down Jackson, a seductive spirit who will do anything to protect the gold’s current location and avenge a heinous attack that destroyed his family.