In an effort to branch out from merely being a “writing blog,” I’m taking the giant leap to FANGIRL. I know, it’s huge *rolls eyes* but I think I can handle this topic: author crushes. No, not character crushes, as there are plenty of those posts floating around the internets, but the people who write the characters we love to love … or hate. 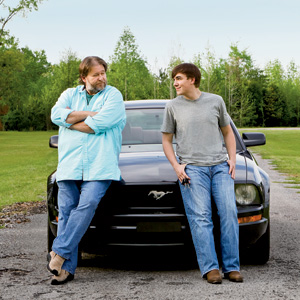 I have made no secret (not even from DH) that I have a crush on Alabama author, professor and Pulitzer prize-winning former New York Times reporter Rick Bragg. I started reading his stuff when we first moved to Mobile two years ago. I was looking for a regional voice to help me learn about my new home, and his name surfaced time and time again.

I’ve never met Russ Nelson, but I’m told by friends who have that he’s handsome and charming, which is great and all, but it’s his writing that reeled me in. A writer friend lent me his first book, Teach Me, after I was about 75% done with my first WIP. There’s a common theme and he’s also an Alabama writer. (Embarrassing confession: After I realized the similarities, I wrote a totally gratuitous scene as an acknowledgment to Nelson. Surprisingly, my critique group didn’t pick up on it, so perhaps not as obvious as I thought … even though the teacher’s name is Mr. Nelson!)

After reading another of his books, Days of Little Texas (I still need to get my hands on Breathe My Name and Throat), I realized we have a common appreciation for the slightly twisted and uncomfortable. Days addresses a number of issues I’ve debated with DH over the last 10 years. Make me squirm, make me think and I’m done-for.

He’s close to my age, he’s sweet, he’s Southern, he’s well-spoken, and his first book, Where Things Come Back is a quirky bildungsroman from a male POV that’s reminiscent of Catcher in the Rye. I’ll be honest, Catcher is not one of my favorite books, but throw in a woodpecker (and woodpecker tattoo), zombies (kind of), and 21st-century sensibilities and it’s a whole different ball game. Bravo. Also, he quoted my review on his site, so bonus points!

As a hopelessly straight female, I can’t claim to have any female crushes, but there are quite a number of “scribbling women” I wish were my BFFs. (There are many more, but I’ve narrowed it down.)

Go ahead. Laugh. Throw things at the screen and yell, “Cliche, j’accuse!” But she was my first introduction into YA at a time when I was strung out, sleepless (DD had just been born) and I was tired of the adult, literary stuff I’d been trudging through. When I read an interview that said she’d written Twilight while her youngest son was an infant and not yet sleeping through the night, she became my hero. (Now I know that MANY YA authors have young children and are sleepless, as well.)

I also loved that she was willing to stick to her conservative principles and practice “less is more.” That takes restraint. Going back, I can rip the book to shreds, but it will always have a special place on my shelf and Meyer will forever be the BFF that isn’t.

We work with a number of authors on Novel Novice and some are hands-on, and some barely acknowledge us, even when we devote an entire month to promoting and mining the educational aspects of their books. They’re busy, we understand. But sometimes, like in Elizabeth‘s case, they are so enthused, so accessible and so much fun that they are an absolute joy to work with, and when we have that connection with an author, we are personally invested in the success of their books.

Elizabeth and I also share a love of music, especially Rachmaninoff, as well as an appreciation for Jane Austen. Hello, kindred spirit!

Yeah, she’s dead, I know. But life would never be boring with her as a BFF. Read between the lines of her (seemingly) innocent novels and you’ll find a witty, thoughtful, shrewd and sometimes covertly bawdy firecracker. I mean, she created the prototype for tall, dark and handsome: Mr. Darcy. For this, I bow down and kiss her satin slippers.

Your turn: Who are your author crushes and fantasy BFFs?