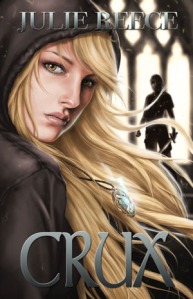 I’ll admit, I squealed when I got an ARC of Crux by Julie Reece–I’m a huge fan of Cassandra Clare’s YA urban fantasy series, and I was anxious to dive into Reece’s contribution to the genre.

Add in that it’s set in Atlanta–as opposed to, say, New York or London–and I was bouncing in my seat.

She should have run. Now, she’ll have to fight.

Eighteen year old Birdie may be homeless, but she’s surviving, that is until a mysterious guy throws money in the air like a crazy game show host, and she grabs some with the idea she’ll be able to buy dinner that night.

In that singular moment, unassuming Birdie becomes the girl in everyone’s viewfinder. Thugs want to kill her. Money-guy wants to recruit her. The very hot, very rich, and very out of her league Grey Mathews wants to save her.

Birdie, though, wants nothing to do with any of them, until she realizes fate didn’t bring them all together.

Now, with only twenty-one days left, she’s got to decide whether to follow in the footsteps of those before her or risk her life for people she’s only just met.

That synopsis only gives readers a tiny hint of what’s contained in Crux, the key word being “heritage.” This is where the fantasy part takes over from the urban element and readers are asked to suspend their disbelief.

Birdie is an unlikely, reluctant hero asked to embark on a journey that takes her in and out of ancient history filled with ominous Vikings (picture a scruffy Alexander Skarsgard!) and lore that we only read about as myths. For Birdie, they are all too real and the consequences are deadly.

Reece does a magnificant job twining the two timelines together, allowing us to feel ourselves being sucked into first one world, then the other and back. We feel the same push-and-pull that Birdie does, both in her quest and with the characters this tough loner comes to care about.

Creating believeable side characters is another of Reece’s fortes. Readers will alternately love, hate, and want to smash their fists through the characters’ faces. Dylan, Kate and Scud–and even the brief appearances of Shondra and a human Fenris–are reminders of what Birdie is missing, what she once had, and what she stands to lose.

Birdie’s eventual (and insistent) love interest, Grey, is swoonworthy, sure, but he also grows throughout the book, aiding Birdie in her evolution while making strides in his own life. Kudos to Reece for showing restraint in their relationship and making readers smolder page after page (wink, nudge).

Finally, Reece pulled off a number of plot twists that I totally didn’t see coming. Looking back, I really should have. The clues were all there, yet they took me by surprise. I love that!

Crux is a smart, heart-rending and empowering addition to YA urban fantasy that will appeal to Cassandra Clare fans, lore fans and really, anyone who appreciates tough characters that know how to tug readers’ heartstrings.

Pick this one up, people. 🙂